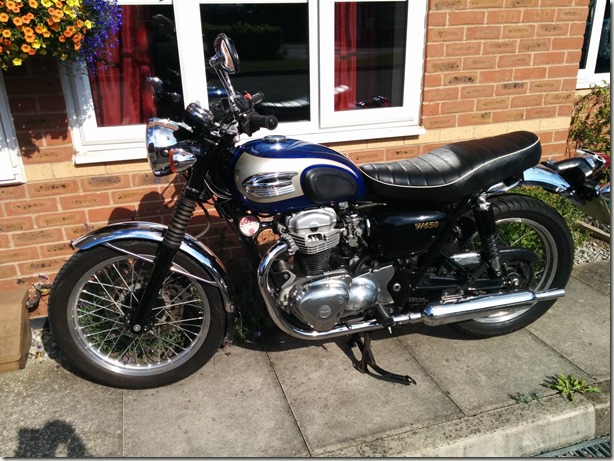 It is bloody lovely. After I’d blogged last time I thought of a few things I should have added. For one thing I do seem to have learned restraint. In the past I’d tootle along until someone was in my way then I’d blast past them. And the one in front of them. I was a Pringle overtaker, once I’d popped I just couldn’t stop. Until Mr Plod had a word or I was picking the remains of my bike up. It was great fun, but not conducive to long periods of safe motorcycling. Anyway, I said about finding the torque-y part of the rev range on the same ride as I came off the motorway a BMW tried to pass me on the inside. I was feeling a bit sporty so I held him off. Then we came up behind an artic (bastard lorry drivers!) and I thought “let’s see you do this, sunshine”, I could have blasted down the separation zone, the foot or so wide bit painted down the middle to keep the traffic apart. This would have left me with millimetres to spare if a lorry had turned up the other way. This would not have even been a consideration before, I would have shot past and any potential oncoming traffic would have to make way or kill me.

I di the unthinkable; I dropped off the revs and sat behind the lorry! Nothing came the other way, so I could have done it, but strangely I didn’t care.

I’m still not too concerned about crashing and dying horribly, I’m just terrified of smashing up my lovely bike.

I spotted some groovy gauntlets on ebay. My gloves are mad hot and not gauntlets. I’m of the old school. Gauntlets are what you wear on a motorcycle.

Check that out for groovy! Half way to my elbow, thick but pliant leather with wool lining.

When I convert it to a cafe racer I’m going to go the whole hog and get an open face helmet and goggles. And a white scarf. And boots with buckles. I’m drawing the line at turned up blue jeans though.

Just looking and I am tempted by a modern take on the open face helmet. You know those pilot’s helmets with the slide down darkened visor/ sunglasses thing? That. 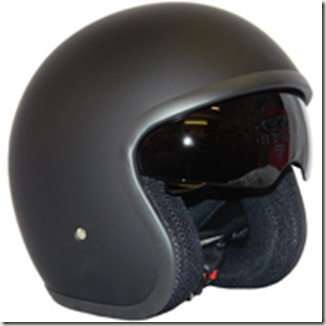 I don’t know. I think the goggles and helmet look wins out if you can get it to work. The last time I had it the goggles were too big, wouldn’t fit in the helmet open face, so were totally useless.

Try before I buy next time. If the goggles don’t work the above is an option.

You know the ongoing saga of my shin injury?

I thought it might be related to my over-pronation, ie rolling my foot outwards as I run. Obviously this puts undue strain on things. And I had that massive injury when I tried to rush the conversion to forefoot striking (natural running). My trainers for over-pronation correction boast that they don’t do it by sticking a spike in your instep to stop you, but by guiding your foot from heel to toe in a corrected style.

Adding all this up, in my ill informed and utterly half-arsed manner, I concluded that for my trainers to work, thereby correcting my over-pronation, thus preventing further injury, I should heel strike. My natural tendency is for more of a forefoot strike, but I’ve been forcing my head back to make my foot reach further and heel strike.

I did one run last week on tarmac at a relatively good pace and my shin was miserable again.

In despair I put it to the Twitter hivemind: “Doing everything; running slow, on grass, heel striking… help!”

Someone got back saying “How’s your gait? Over striding and heel striking can injure your shins.”

I did an easy 5 mile run yesterday (before that conversation) and my shins were still hurting. Today I was down for a 17 mile run. As I had nothing to lose I thought I’d abandon my ‘corrected’ gait and run naturally, which is more forefoot striking. 17 pretty constant, relatively brisk miles and my shin was fine.

Months I’ve been trying everything and anything to stop the injury getting worse but it’s possible I was actually causing it.

Once again the irony gods piss on my cornflakes.

That was only one run so let’s not get too excited, but it was my longest run in many months, at a reasonable speed (by current standards) and my legs were good to carry on at the end. That is something. A big something.

The slight downside to my jubilation was the fact today was the Outlaw. From which I withdrew, wisely as it turns out, but still…

Work has picked up. 5 days straight last week, already pestering people to do extra shifts next week. This is good. Last week was a trial though, every day as I got in the bedroom was like an oven. By the end of the week I’d thrown caution to the wind and was leaving the window wide open for a draught. The kids didn’t wake me too much. Not looking forward to summer holiday sprogs.

Wendy is back to her full hours as of last week, they reckon she’s back up to speed now so she’s being set loose on her clients as of tomorrow. She’s dying for it. To get back to what she knows and does well, rather than having people setting her computer tasks (with which she struggles) and constantly looking over her shoulder. I gave her my old ‘phone a while back. Bit by bit she’s got dragged into the 21st century. She’s realised she can watch stuff on it and google stuff. I’ve shown her how to text people. There is no stopping her now. She sent a text last week. Not even a reply, she went to contacts and texted from there. Go Wendy!

Now I just have to sneak a Twitter account on there for her and she’ll fully integrate into the Collective.

I will get around to catching up on Twitter for you, not tonight though.