OK, my maturity and delayed gratification ethos may have had a bit of a blip.

I was obsessing over that Kwak W650, but delaying buying one until we’d paid our debts. I was doing lots of window shopping though. Lot’s of 1999 or 2000 bikes for sale, about £3,500- £4000. Then I found out in 2003 they upgraded the front brake and put lower handlebars on. Obviously I then wanted the newer version. Less time to rust, better spec.

I also realised I had enough credit on my credit card to buy one. Once I’d realised that the die was cast, really. 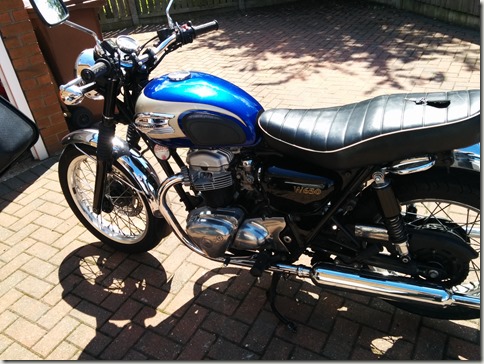 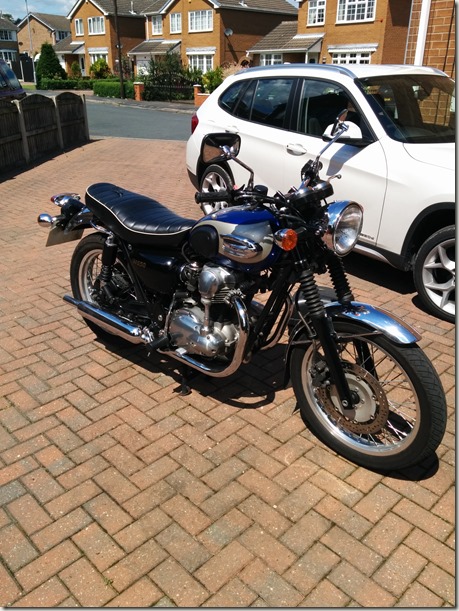 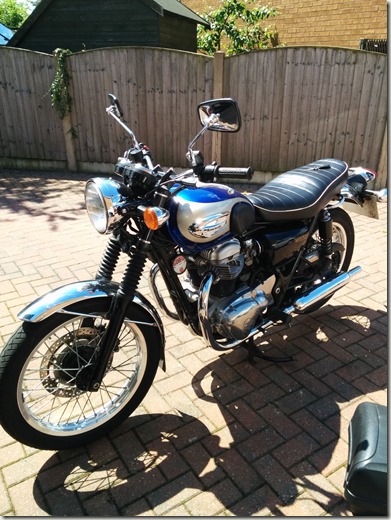 After the kids vandalising my car I’m scared to leave it around the front, but I’ll try and get some better quality pictures soon.

I’ve started tinkering a bit. Changed the plugs, ordered a new air filter, adjusted the tickover, adjusted the chain tension. It felt like it was gasping a bit. Then it cut out on me twice. After worrying about that for two days I finally solved the problem.

I put petrol in the tank.

It’s hard to convey what a difference it is. In a car you sit there, bored and frustrated and at best get from A to B without too much hassle. On a bike you enjoy the ride and are gutted to arrive. First ride in the rain today, and even though I was tip-toeing around it was still great.

Over the last few days I’ve remembered what biking is about. All that horrible stuff you hate about car driving, queues, arseholes in BMW’s screaming from the lights, it’s all fun on a bike. Nip to the front of the queue grinning the whole time. Beemer boy smokes it from the lights, twist of the wrist and you are monstering him. It’s pure joy.

I’m managing to stick to sensible speeds and ride fairly safely. I tried to reassure Wendy, who thinks I’m going to kill myself that it’s such a lovely bike, and I’m so happy with it, I just want to keep it upright and in one piece. I said “I really think this will be the last bike I ever buy.” Wendy replied “That’s what I’m worried about.”

Got a new bike jacket as well. Tons of armour. All kevlar and such. 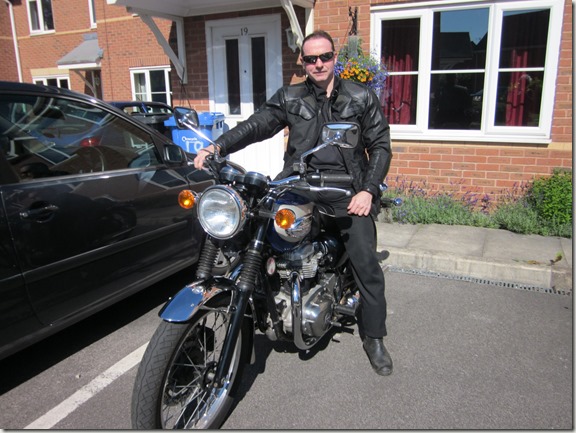 Not that I intend to crash, but I want to be fit enough to seriously pound anyone who crashes into me.

I’ve got the bike, now I just need lots and lots of work to pay for it.

As things wear out and when I’ve paid everything off, I’ll start converting it into a cafe racer. For now though, it a beautiful bike as it is.

Oh, I also got a bunch of kit with it. A screen, a back rack and topbox, and engine crash bars. And it has heated grips for winter. So much win! I could fit all that kit and make it a much more utilitarian beast, but it’s so damn pretty I don’t want to. I’ll stick the engine crash bars on. They are not too ugly and should the worst happen would save the engine.

On the win front, Wendy has started a phased return to work this week. They are getting her back up to speed and making sure she’s OK, then she’s back to normal work. She went for her ultrasound yesterday and they reckon she’s all clear. YAY!

They think the pains were normal healing pains, they couldn’t find any missed stones or signs of fluid build up to indicate organ damage from the operation. In short, she should be fine and shouldn’t need further surgery. If the pains persist she has to go back to the doctors and they will have to give her different scans, but the ultrasound guy thinks she’s OK.

My non-diet diet is still working. Just try to eat a little less, not as much chocolate, and keep up the running. I’ve lost over half a stone. It’s taken ages, but as long as it’s moving in the right direction I can wait. And it’s sustainable. ‘Real’ diets that leave you starving and craving are not my bag. I don’t have the willpower.

My latest attempt to get my running mojo back and avoid injury by following a training plan seems to be working. I’m on week 3 and (touch wood) still not crippled.

I’ve been re-arranging the garden again this morning, trying to make it easier to get my bike in. 4 bin bags of plastic plant pots, and general crap, 4 old mouldy garden chairs we never use, a rusty old knackered chiminea, a broken hosepipe, the frame of a mini greenhouse… Amazing the shit you pile up and forget about. That’s all been taken to the skip. I had a spare paving flag so I’ve laid that. Shifted the potted pear tree, the daphne pot, the green bin and the punch bag. I now have a fairly large area to play with. We’ll see.

I bought a bike cover yesterday as it’s going to be massively impractical to try and get the bike in the shed every day. I’ll save that struggle for when I’m working on it. I’ve sawn the fence down and put it back up with hinges on to make it into a big gate. The gap between the buildings is just enough to squeeze the bike down, there is no room for manoeuvre and the lock on the steering is laughable, so the single gate was never going to work. I thought I was saving money by buying a cheap set of three hinges for about £6 instead of the big-arse hinges that were £12- £14 each. They bent after two days. Oh.

As it’s such a faff getting the bike in and out I’ve not tested the cleared garden yet. I’ll do it later when I have to get the bike out for work.  If necessary I can stick another two flags down easily (and cheaply) enough. Everything is about the bike. Priorities. I’ve got them sorted.

Just tried the new arrangement. It’s spiffy. I’ve got enough room to easily bring the bike in and room enough to turn it so I can take it out front first instead of having to back it up the whole way.

I’ve just been for a spin. I ended up going through Frodsham but that wasn’t where I was going. I wasn’t going anywhere, just enjoying the ride.

I can honestly say I can’t remember ever ‘going for a spin’ in a car. I am always going somewhere. It wouldn’t occur to me to just drive about aimlessly. That’s what I just did on the bike and loved every minute of it.

People stop to watch you go past, every queue for the lights is a bonus, the instant surge and roar of power at the slightest twist of your wrist, bikers nodding at you, guy at the cash machine started talking bikes.

I did notice after opening it up I was having real issues keeping the bugger down to 30mph. You only have to think of moving your wrist and you’re off like a shot. I’ll have to keep my eye on that.