I’ve just managed to drag myself away from a German website devoted to cafe racer-ing W650’s. Now that tax discs are no longer being issued you can buy vintage ones for decoration if you want. I’ve bought a May ‘66 one, registered in Hinckley (home of Triumph Bonneville, hehehehe), which got me thinking. You can buy very cheap (£12) custom pre 1973 black and silver number plates. Not road legal, of course. Just for *cough* ‘show’. *cough*

When I replace the seat there will only be the tank badges (which apparently will pull off) left conspicuously saying Kawasaki. I’m going to run it like a 650 Bonneville cafe racer. I don’t care that it’s not, you have to trade authenticity for reliability. It’s going to be very hard to tell it apart from the real thing, so hopefully the coppers will let the ‘plate slide. Should I forget and ride it with old style ‘plate on. M’lud.

So after buying the plate and the tax disc I wanted to ditch the long mudguard and replace the seat. With a tail tidy I could transform it in one hit. It just means instead of the seat and back end looking like this: 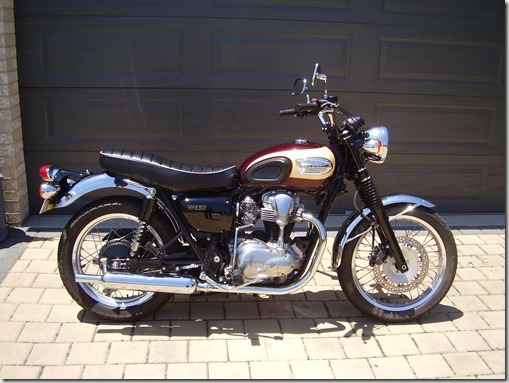 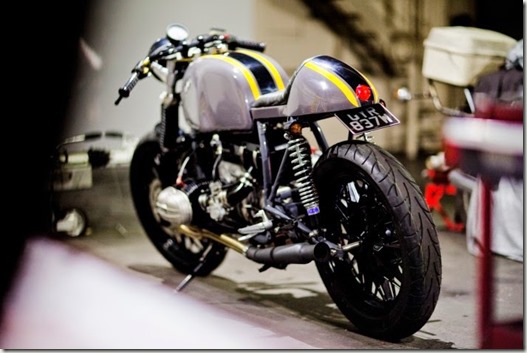 The shape and the general tidiness, not necessarily the colour or that exact seat. In fact, that seems to be a BMW engine (curse you, Google images!), so not like that at all. But that’s what a tail tidy and cafe racer seat (with a black and silver number plate by coincidence) can look like.

Anyway, I was looking. And window shopping. And tracking down different styles. I found that German site again (all my saved links were lost when I had to reinstall Windows form scratch). It’s all to fit the W650 on that site, so no fannying around trying to make it fit.

Progressive fork springs and oil (which is next on my list even thought it won’t alter the look. It will sharpen up the handling so no bouncing around on rough corners, less chance of crashing.)  € 150

Plus postage and package from Germany..

In the end I closed the site down and set to blogging instead.

We’ve just bought a washing machine, tumble dryer and soundbar for the telly, we still have £2.5K outstanding on the card, the car is having work done for the MOT, and we are fast approaching February, when work is supposed to drop off.

So I resisted. Reluctantly and begrudgingly. I hate being a grown up. *sigh*

Work has had an event, as well. The procedure when coupling up to a trailer, by the book, is to reverse to just before the trailer, stop, get out, check the trailer brake is on (it always is) check the unit is level with the trailer so the pin on the trailer will slot into the fifth wheel on the unit, get back in and reverse.

In practice, if you are in a rush, you can reverse under the trailer a bit, hit the ‘up’ button on your unit’s suspension, it lifts the trailer, you can’t miss the pin, reverse.

Until you get a unit with temperamental suspension. I hit ‘up’, reversed, it didn’t raise, I went straight under the pin and the lip on the trailer hit the back of the unit. It just scratched the paint on the frame that hold the air and electrical lines (Suzies) and trapped and partially severed one of the electrical Suzies. Super.

So I had to report it. A second accident in the few months I’ve been there.

The agency rang me to tell me the company have a three-strikes-and-you’re-out policy, I can continue to work for the agency but not for the company if I have another bump.

I was hoping for a proper job out of this, now it’s all in the air again.

They still had me back in and doing overtime on a sixth shift, so they didn’t take it to heart, but it can’t have done my prospects any favours. The worst thing is, it was a tiny bump and a stupid, preventable one. That’s why the drills are in place. 99.9% of the time they are unnecessary, but they catch that 0.1% of incidents. Which means I don’t have a leg to stand on and no-one to blame but myself.

In other, navel-gazing, news, I may have finally sussed a solution to my perennial problem of guilt and angst. I’ve tried all sorts, when I drank I used to self harm, did nothing. I’ve forgotten most of my life, not helped. I’ve tried to accept as I can’t forgive, not happening.

Then, in flash of insight, it struck me as revelation that these memories and associated reactions have no external reality. They are not a thing. To engage with them, even in fighting them, is to validate them.

I can beat the system with serenity.  This is doubtless an ancient truth, your man the Buddha was all over it, but to me it was a personal revelation.

I’m going to look into meditation. It’s so simple it’s laughable, just be serene and don’t react. My brain will form new pathways instead of running down the same routes and being reinforced every time, the bad shit will wither and die.

I may be the new Buddha. I’ve got the figure if not the wisdom.

(I know, the fat, Laughing Buddha isn’t The Buddha. Yet.)

In associated news, I’m looking into a martial art. Again. Wendy is suffering concussion from facepalm. How many Gi’s? (fighting suits) Another joining fee? Etc. Anyway, may have found a karate organisation that has clubs running on most nights which is what I need for my stupid shifts. If they will let me join and attend different clubs in the the organisation on different nights I could make it work.

Running was going swimmingly. Two surprisingly fast and easy 20 mile runs at the weekends. I’ve not been getting chance to run in the week though, so it was bound to falter. I tried for a long run today but it all went tits up. I was going to run out 13 miles that way you *have* to run back 13. My bloody Garmin GPS watch froze before I was 5 miles out. I only know the mile markers for 5 miles on that course, and the 6 on the other. And it was BITTER! I thought it was cold last week but the wind cut clean through me today. Even running with my waterproof (windproof) jacket on I was still freezing. I did 14 miles on the first course but as I passed our house to start the second, 12 mile course, my will broke and I stopped.  Bah.

I’ll do a Twitter update tomorrow. Best go and see Wendy before she forgets what I look like. (Fat, if you were wondering. The diet didn’t take.)

1, Tell people to “listen to that wind.”